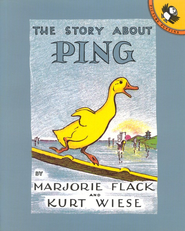 Title: The Story About Ping

About the Author and Illustrator

Marjorie Flack was born in October of 1897 in Long Island, New York.  Flack is best known for her children's books The Story About Ping (1933) and The Boats on the River (1946) which  received a Caldecott Honor in 1947. (Palmquist, Children's Literature Network, 2013)

Kurt Wiese was born in April of 1887 in Minden, Germany.  Before becoming a children's book illustrator Wiese traveled throughout the Far East and became an exporter in China.  During World War I, Wiese was captured by the Japanese and was detained at a prisoner-of-war camp in Australia.  After being released he returned to Germany and then eventually moved to Brazil where he began his illustration career.  Wiese received the Caldecott Honor in 1946 for You Can Write Chinese  and in 1948 for Fish in the Air. (Palmquist, Children's Literature Network, 2013) 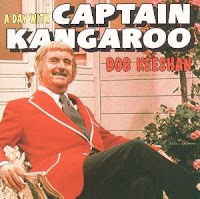 The Story About Ping  has been a popular selection for children's literature since it's first publication release in 1933.  Beginning in the 1950's the story was read once a week on the famous television show Captain Kangaroo for a consistent 17 years. (Unknown, 2013)
According to a poll taken by the National Education Association in 2007 found at NEA.org, the book was rated number 97 for the Teachers' Top 100 Books for Children and is found in bookshelves across the world. (NEA, 2007)

The Story begins with the introduction of a beautiful young duck named Ping.  He lives with his extremely large extended family on a boat with two wise-eyes that sails down the Yangtze river.  Every morning their master would allow them off the boat to search for food; however as soon as their master would call them back with a, "La-la-la-la-lei!"  the family would return to the boat as quickly as possible to avoid being the last one to arrive.  Ping was always very careful to not be the last duck in line, for that duck would be spanked on the back.  One afternoon, Ping was searching for food and missed his master's call and realized he would be the last to return to the boat.  Since Ping did not want to be spanked he decided to hide and he watched the wise-eyed boat sail away.  Ping began to feel extremely lonely so he decided to swim down the Yangtze river where he was caught by a young boy and his family who was going to cook him for supper.  The young boy felt it was wrong to eat such a beautiful duck so he let him free.  With luck on Ping's side, he decided to head back to his family on the wise-eyed boat.  Ping knew he was last again, but he still marched behind the others up to the boat and accepted the spank from his master.


Click here to view a reading of The Story About Ping 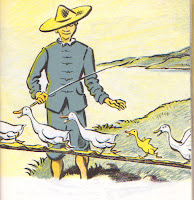 After reading The Story About Ping I was truly amazed that this children's book has had more positive reviews than negative. Click here to read reviews.  Although it was written in a generation where spanking was generally accepted, I found that the general lesson the author is presenting sets a fear into young minds that it is not OK to be last, and when you are, you will be punished.  Also, if you try to avoid punishment, you will face death or other horrible situations. Although the story is well written for its time and will definitely interest and engage its reader, it does contain racist stereotypes in the text and illustrations, outdated views of the Chinese culture, and generally provides a negative effect on a child's self esteem. 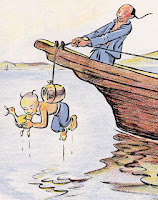 I found many stereotypes within the text of this book, as well as within the illustrations.  In the beginning of the story we are introduced to Ping.  Well first, when I hear the name "Ping" I immediately think of Peking duck, a well-known Chinese dish, which actually comes into play later on in the story when Ping is about to become a family's dinner.  I'm not sure why the author chose Ping as the name of our character, but it definitely comes across ironically disturbing in my eyes.   Anyway, we then meet Ping's extended family that consists of his mother and father and two sisters and three brothers and eleven aunts and seven uncles and forty-two cousins.  Now hearing this the reader can immediately come to the conclusion that Chinese families are large in general and all live together under one roof, which in today's generation is typically not true.  Once we meet Ping's family we are introduced to their "Master."  Illustrated as a yellow man wearing a customary Chinese outfit and a rice hat.  He is also holding a long whip that he uses to punish the last duck in line.  All the human characters within this story are colored yellow with slanted eyes and straight black hair, some in pony tails.  Even the young boy has two small pig tails on the top of his head.   Now why is this?  Well typically people of Asian descent are known as having yellow skin and of course we associate slanted eyes to Asian ethnicities.  Even the boat in which they live on is referred to as the Wise-eyed boat and is illustrated as "Asian Looking." The "Master" even calls out, "La-la-la-la-lei!" which to me seems that Flack is trying to portray an Asian accent within this character and is somewhat offensive to myself being Asian. Now having a "Master" is something I directly associate with slavery.  Although slavery was not legal in the 1930's, in which this book was published, the reader gets the sense that the need for superiority still existed and that the Chinese people practiced the act of dominance over those of lower status, and it was accepted.  Animal cruelty also seems to arise in this book numerous times.  First of course with the spanking of the ducks, but we also see it when Ping visits a fishing boat with strange, dark fishing birds that would swoop down and catch fish for their "Master."  To keep the birds from eating the whole fish they had metal bands strapped around their necks.  Now if this isn't animal cruelty, I don't know what is; however after researching, I found an article at ChinaTravel.com about how Chinese fishermen learn to train cormorant birds to catch fish for them and it has been used for many generations and is typically accurate yet unfortunate for these birds.  Now yes, there are many stereotypical issues and outdated material found within the text and illustrations in this book; however my main problem is the fact that it focuses on the punishment of the young duck or "child" when arriving last and when the duck shows fear in his punishment it leads to the risk of death.  Surprisingly, after researching numerous websites, many mothers do not agree with me.  Many feel that this story provides a positive reinforcement of following directions and provides an accurate context of the Chinese culture, however I would not read this to my own children in fear that they might get the impression that they will be punished for being last or even think that it is OK to spank for this reason.

Unknown. (2013, January). Wikipedia. Retrieved from The Story About Ping: http://en.wikipedia.org/wiki/The_Story_about_Ping